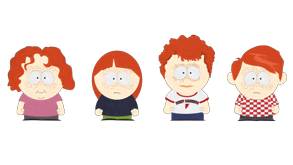 Children with red hair, light skin, and freckles. According to Eric Cartman, all Ginger Kids are born with a disease called "Gingervitus", which occurs because Gingers "have no souls." Due to their light skin, Ginger Kids must avoid the sun -- not unlike vampires. They have formed their own terrorist group, the Ginger Separatist Movement, which espouses a 'red power' rhetoric in which Gingers take control of the world governments and rule with an iron fist. The only way to avoid having a Ginger kid for sure is to marry a Japanese woman, as they don't care the gene... though Japanese people also don't have souls. Also be wary of "Daywalkers", which are people that have red hair, but not the pale skin and freckles... like Kyle Broflovski and Red.

Gingers appear as one of the earliest and easiest enemies in the game, easily defeated on their own but making up for it by appearing in hoardes of hundreds on harder levels and modes. Coincidentally, Dougie and Scott Tenorman, who are also Ginger, appear as two of the game's mini-bossses.

An army of Ginger Kid robots are the central enemies of the game, appearing in every level and needing to be defeated by the player, with multiple types. Besides their leader, Scott Tenorman, the game contains no actual Ginger Kids.

South Park: The Stick of Truth

Levels involving the original Ginger Separatist Movement were cut from the final version of the game, but one does encounter Gary Nelson and a number of Ginger hallway monitors during the first school level, including a special boss. They can cause 'gross out' effects by merely touching the player. They also come with special items, stickers and perks when defeated.